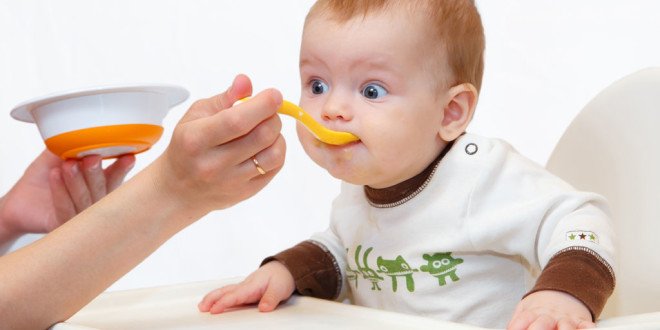 If you’re expecting a grandchild, chances are you haven’t fed or burped a baby in a while. In this article, we’ll quickly cover the basics, from bottle feeding to introducing finger food. It’s a fast refresher to get you ready for the little one.

Getting Ready for Bottle Feeding

Even if a mother decides to breastfeed, many choose to bottle feed also. Baby formula can be used to give the baby nutrients they don’t get from breast milk. Bottle feeding also allows other people to feed the baby so mommy can have a break, or to feed the baby when out and about.

The first step in bottle feeding is to make sure everything is clean and bacteria-free. Wash your hands well before touching the bottle or anything related to it. Bottles must be sterilized before use, through boiling, steaming or using special chemicals for that purpose.

Start by boiling the water and letting it cool. There are different types of formula, each with their own preparation instructions, so follow the instructions. Measure the formula carefully. If it’s too weak, the baby won’t get the nutrients it needs; if it’s too strong, it could cause damage to the baby’s kidneys or other organs.

Don’t add anything to the formula and make sure you don’t mix scoops from other containers. Don’t use the bottle for anything else other than baby formula, even if you’re sterilizing it carefully. If you make more milk than you need right now, you can refrigerate it for up to 24 hours.

Hold the baby close to you when bottle feeding. Don’t leave the baby alone to drink the bottle. There are a variety of good positions for holding the baby. You can cradle it or sit it up in your lap.

Tilt the bottle so that milk fills the nipple completely. Make sure the baby is drinking. It usually takes several minutes and the baby may need breaks. You’ll know if you see signs of stress or milk spilling out of the baby’s mouth. When the baby takes a break, keep the nipple at the edge of its mouth so they know where it is. When the baby is done, it’ll usually let you know by turning its head or pushing the bottle away.

Burping and winding mean the same thing. “Winding” is a term many people use today because they don’t want to associate the baby’s cute after-bottle habit with the more repulsive adult version.

Burping (or winding) brings up swallowed air in controlled burps and is usually done after bottle feeding. Burping helps with the baby’s digestion and, by proxy, overall mood. In many countries where breastfeeding is the norm, burping isn’t done.

How do you know when they need burping? It’s good to give it a try every time after bottle feeding. They may also need it if they appear grumpy. Sometimes it’s done in the middle of feeding during a bottle break.

There are many ways to burp a baby but the important thing is that it needs to be held upright. You can cuddle the baby, sit it upright, or walk around with the baby on your shoulder. If you choose the last option, make sure you throw a towel over your shoulder first because often more than just air will come out.

While the baby is upright, lightly jiggle the baby and massage or gently pat its back to help the gas and air move upward. When a baby needs to burp, it’ll often make grunting sounds and show signs of discomfort. You’ll know that the baby is done burping when it stops making these sounds and feels more relaxed.

At about six months, a baby’s energy needs start to grow beyond the nutrients supplied by milk alone. They need nutrients such as iron and zinc. This is also around the time when a baby stops reflectively sticking out its tongue in search of a nipple, an action that makes feeding difficult because the tongue thrusts away food.

However, some babies are ready at four months and others may not be ready until seven or eight months. Ultimately, it’s up to the baby. The baby may be ready to start solid foods when:

Until about one year, solid foods should be used only to supplement breastfeeding and bottle feeding. Add solid foods into the mix to give them those extra nutrients that they need.

Start with soft foods that are easy to eat and introduce new foods gradually. To start with, soft fruit and vegetables like mashed bananas or avocados are good. When you first introduce solid foods, give the baby a few weeks before you introduce the next one so they can get used to it.

Gradually, the baby will start eating finger foods by itself. There are baby-specific cereals, sometimes called “baby O’s” that make perfect first finger foods. At the finger food stage, you can offer more variety.

The great thing about finger foods is that babies find eating them fun. They generally love feeding themselves and playing with this new and exciting food. Babies take great delight in new tastes and textures, so provide them with plenty of variety.

There are a few things to consider when it comes to solid foods. The first is choking. At first, you’ll be serving the baby only soft foods. As you get into more solid food, cut it up into very small pieces to prevent choking. Certain foods that don’t dissolve well, like whole grapes or sausages, should never be given to babies.

Another concern is allergies. Food allergies were rare in the days when today’s grandparents were feeding babies. This is because we ate more real, seasonal and local food. Today, they have become much more common. Certain foods, like peanuts, berries and dairy products, should be introduced with caution. Introduce them one at a time. If there is a history of any certain allergies in your family, these are especially high risk.

Finally, respect the parents’ wishes when it comes to what to feed the baby. Your natural grandparent impulse is to spoil the baby with treats and goodies. But differences in opinion on feeding the baby are a major source of conflict between parents and grandparents. Respect parents’ rules; you’ll have plenty of opportunities for spoiling the grandkids when they’re older!