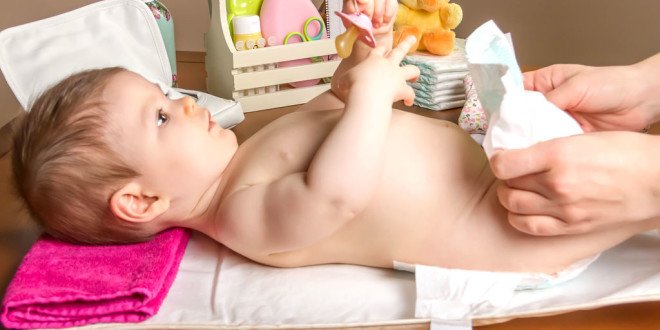 As a grandparent, you may or may not be expected to change diapers. This is something you should discuss with the new parents. However, if you offer to change diapers even though it’s not expected, this will be a great relief to the parents, which will likely result in more visits and more time with the baby.

In any case, offering to change diapers is a nice thing to do and since it has probably been decades since you last changed one, here is a quick refresher course.

When and How Often?

Diapers should be changed often. As a general guideline, diapers are changed 5-8 times per day. For babies over six months, this is more like 5 or 6 times a day. But keep in mind that this is just a guideline.

There are certain times when it’s good to do a quick diaper change. Of course, when the baby is wet is a good time, although with the improved moisture control of modern disposable diapers, wetness isn’t always a cause for discomfort or fussiness.

Other good times for a fresh diaper include:

Here’s a bit of good news for grandparents – Today’s diapers are much better and easier to change than the ones we had when your children were babies. Disposables, which used to be big and bulky and only used as needed, are now highly absorbent and very easy to change. Even cloth diapers have improved a great deal in terms of comfort, effectiveness and ease.

We’ll discuss both below, but the first step for either is to wash your hands well with soap and water. Before you begin the operation, make sure that you have all of the supplies you need within reach. These supplies include the diaper itself, wipes, towels, creams or ointments and toys to keep the baby distracted. You may want to open the diaper and prepare it for the little behind before you get started.

Step 1 – Check which side of the new diaper is front and back. Remove the old diaper. Unfasten the tabs or pins, depending on the type. Gently take the baby’s ankles and raise its bottom slightly off of the surface, just enough to slip the diaper off.

Step 2 – Roll up the diaper so that the soiled part is on the inside.

Step 3 – Put the diaper somewhere just out of reach of the baby. Keep an eye on the baby, because diaper changing time can be a fun time to explore.

Step 4 – Wipe down the entire area of the baby’s body that was covered by the diaper. For the first two months or so, use cotton or a washcloth dipped in lukewarm water because baby wipes can cause rash on a newborn’s sensitive skin. Wipe from front to back to avoid infection. Check to make sure there isn’t anything you missed.

Step 5 – Check which side of the new diaper is front and back. Again, gently lift the baby off of the surface and slide the diaper on, until the top edge is in line with the baby’s waist. Fasten the diaper and flare it around the legs to make sure it fits comfortably and snugly. If you’re going to put any creams or lotions on the baby, do it once the diaper is already on but not yet fastened.

Step 6 – Throw away the old diapers and other soiled materials. Clean surfaces and wash hands well.

Timing is critical. Change diapers carefully and gently, but try to limit the time when the baby’s peeing and pooping parts are exposed, as there are often surprises.

You can make diaper changing time go more smoothly if you sing songs or play peekaboo during to make it fun for the baby. Give them a toy to play with or some music. For older kids, it offers a distraction that makes them less likely to try to wander.

Unlike in the old days, there are many different types of cloth diapers available today. Some are remarkably easy to use. Many young parents now choose cloth not only because it’s better for the environment, but also because they’re highly effective and easy to use.

The steps to changing cloth diapers are essentially the same, but here are a few differences: